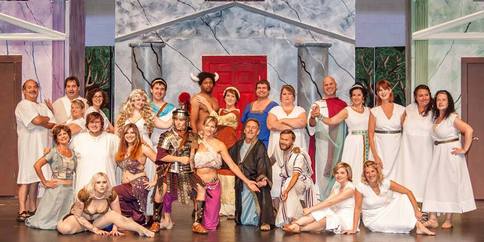 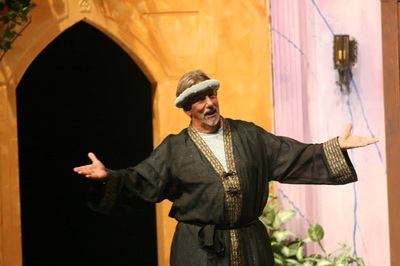 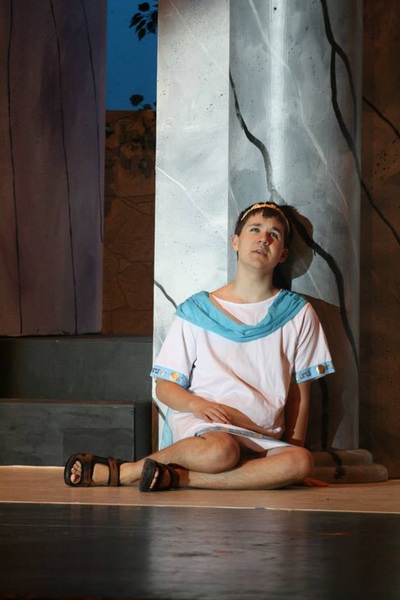 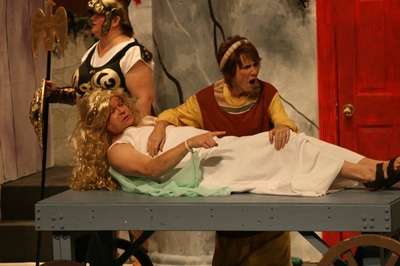 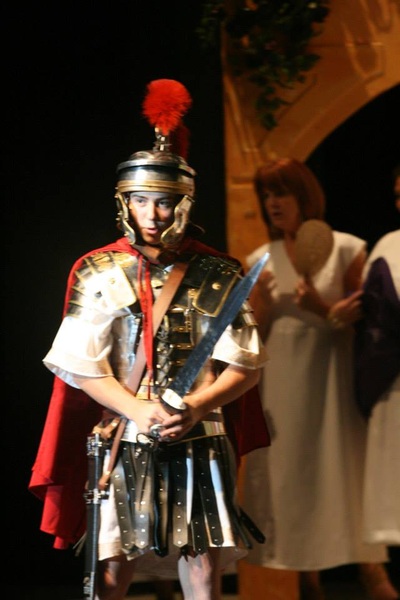 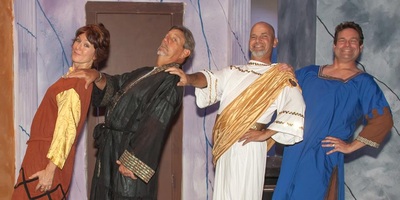 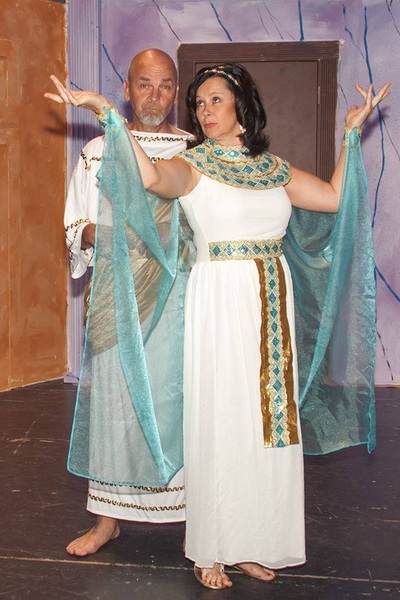 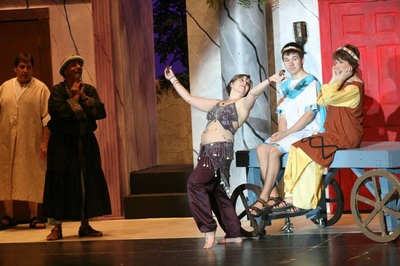 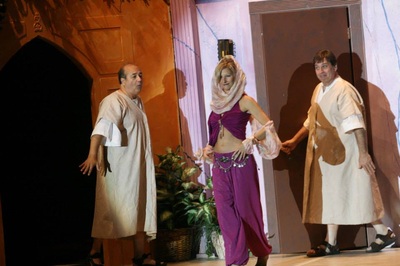 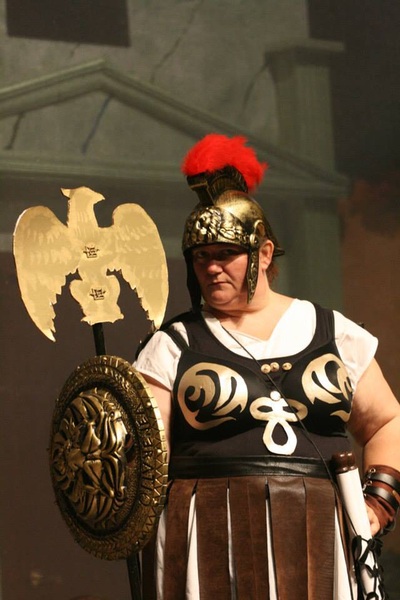 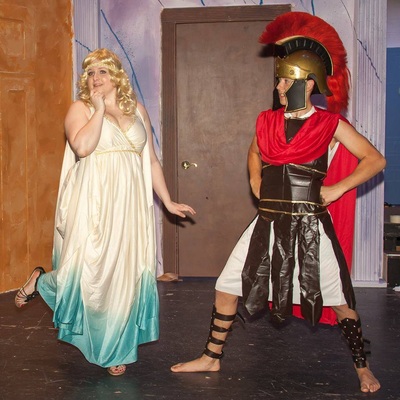 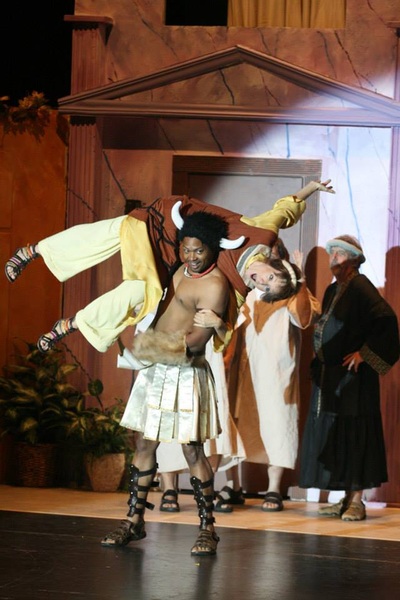 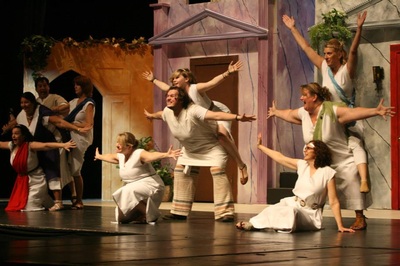 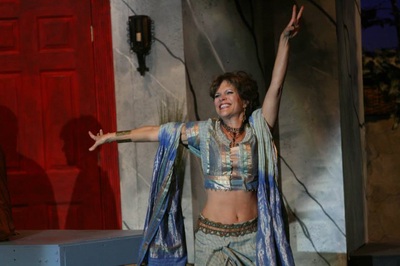 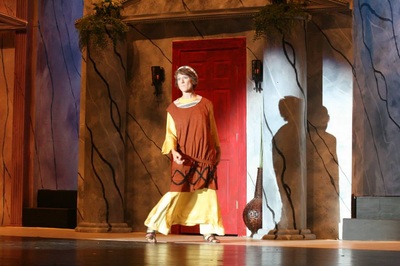 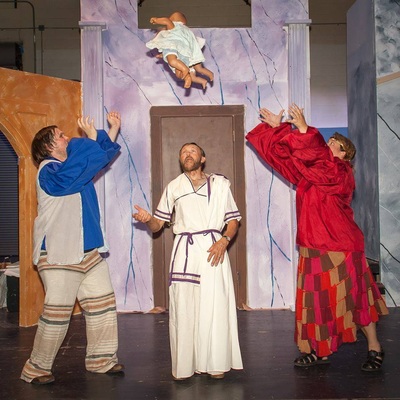 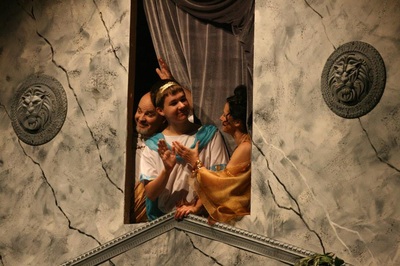 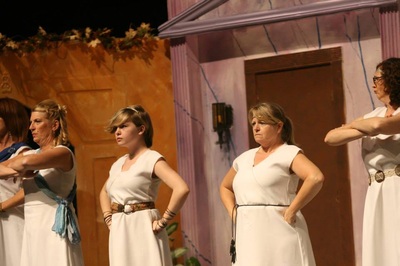 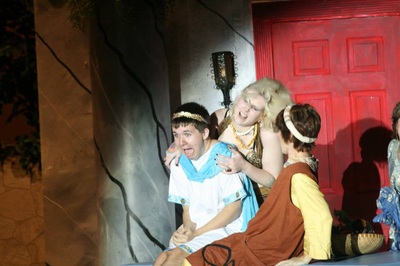 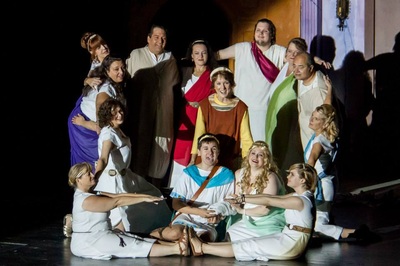 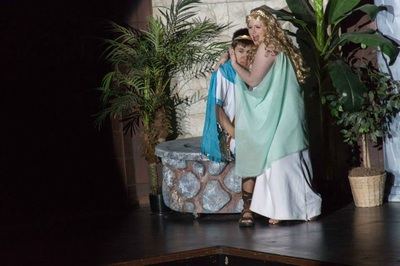 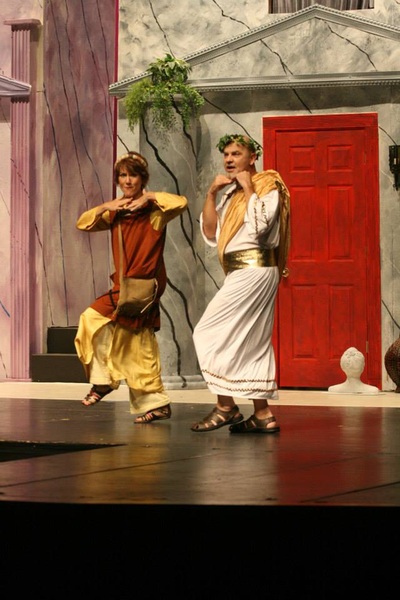 Forum Cast List
Aron, Kathi - Panacea:  One of Lycus’s courtesans, Panacea has “a face that holds a thousand promises, and a body that stands behind each promise.”

Bangert, Karl - Hysterium:  A slave of Senex and Domina.  Hysterium is the frantic and frenetic straw boss of all the slaves in the household. Pseudola cons him into helping her with her plots, including dressing Hysterium up as the corpse of Philia.

Boyer, Jeff - Protean Citizen/Eunich:  Has run in with Pseudola and also in various street scenes.

Elowsky, Angela - Philia:  A virginal girl.  The beautiful and young, yet dumb, Philia none the less belongs to Lycus and is a courtesan-in-training, already contracted to be sold to Miles Gloriosus. She and Hero, however, are in love; and Hero has enlisted Pseudola to get her for him. In the end the day is saved by the revelation that she is the sister of Miles Gloriosus who then nullifies his contract and allows her to go to Hero.

Hayner, James - Miles Gloriosus:  A roman soldier.  Miles Gloriosus is handsome, strong and pompous, so much so that he proudly declares, “I am a parade.” In the end it is revealed that he is the brother of Philia and son of Erronius.

Hayner, Kelly - Domina:  The battle-ax wife of Senex.  Domina is not only domineering, but proud. It is she that tells a slave who is carrying a sculpture of her to “carry my bust with pride” and she doesn’t even know it’s a funny line!

Lawson, Holly - The Geminae: Twin courtesans, the Geminae are, according to Lycus, “A matched pair. Either one a divinely assembled woman, together an infinite number of mathematical possibilities.”

Lovill, Steven - Senex:  An older man, but one still attracted to wine, women, and song.  Senex is the perennially henpecked husband. His wife, Domina, doesn't trust him, but ultimately they do love each other, as Domina evidences by singing: “Angel, my angel!  Where is he, that dirty old man divine?  I love him, I love him, that lecherous, lewd, lascivious, loathsome, lying, lazy, dirty old man of mine!”

Mandernak, Laura - Pseudola:  A slave of Hero.  Pseudola is sly, conniving, and willing to do anything for her freedom, leading to a deal with Hero that if the slave can win Philia for her master, her master will, in turn, grant her freedom.  It is this desire that fuels the action of the play and many of the sight gags. For instance, it is Pseudola who, in searching for Philia, finds herself back-to-back with Gymnasium, a strong fit young man.  Eager salesman Lycus assures her they make a great fit.

Mason, Richard - Gymnasius:  Lycus’s only male courtesan slave.  Gymnasius is “a giant stage on which a thousand dramas can be played.”  He is physically fit and a fine looking man who becomes of interest to Psuedola.  Pseudola and Gymnasius wind up together in the end.

Mellen, Thom - Lycus:  The owner of the brothel.  Lycus is the snaky, slimy, lecherous procurer of courtesans.  He takes a businesslike care of his concubines; for instance, he won’t let them be fanned while wet, afraid they might catch cold; and he warns one fanner:  “If you’re not careful you’ll be a eunuch all your life.”

Neumeier, Paula - Citizen Protean:  Has run in with Pseudola and also in various street scenes .

Robson, Sara - Vibrata:  Another of Lycus’s courtesans.  Vibrata is “exotic as a desert bloom . . . wondrous as a flamingo . . . lithe as a tigress . . . for the man whose interest is wildlife.”

Rutkowsk, Patricki - Hero:  The handsome son of Senex and Domina.  Hero is a lovesick juvenile who schemes with Pseudola how he can win the hand (and body) of Philia.

Saxton, Jill - The Geminae:  Twin courtesans, the Geminae are, according to Lycus: “A matched pair.  Either one a divinely assembled woman, together an infinite number of mathematical possibilities.”

Shepard, Jack - Erronius: A befuddled old man who is partially blind and always confused, Erronius spends most of the play bemoaning his two children who were kidnapped by pirates years ago. However, he is overjoyed when it is revealed that Philia Miles Gloriosus are the long-lost children.

Wright, Michelle - Citizen Protean:  Has run in with Pseudola and also in various street scenes.